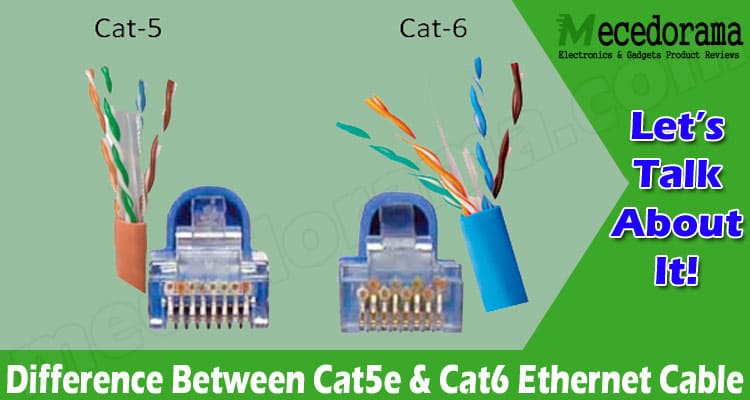 Cat5e and Cat6 Ethernet Cable: When it comes to Ethernet cable, do you get a little bit puzzled about the Cat5e and Cat6 differences? Well, you are not the only one dealing with it. Knowing which Ethernet cable to choose might be difficult because bandwidth speeds and reduction of noise levels are always growing. To add to the confusion, they also look identical in many aspects and have similar performance properties as well. Today, we’ll explain the differences that Cat 5e network cables and Cat 6 Ethernet cables possess between them, so you can come to a more informed selection and find the ideal solution for your requirements.

What is CAT5e Cable?

CAT5 e (Category 5 Enhanced) cable or Category 5e is a standard network cable that got approved in the year 1999. CAT5e surpasses the existing CAT5 standard by up to ten times in terms of speed and distance traversed without crosstalk, offering significantly improved performance. CAT5e network cables are usually twisted pair wires (24-gauge) that can handle Gigabit type networks at 100-meter segment distances. Due to its capacity to provide Gigabit speeds at a very cost-effective price, Cat5e is the most frequent type of cabling used for deployments. For all new installations, Cat5e or superior cabling is always suggested.

What is CAT6 Cable?

Just a few years after the introduction of CAT5e, CAT6, a variant of Category 6 Or CAT6, was introduced. CAT6 is an Ethernet-specific backward compatible twisted pair cable with CAT5/5e and CAT3 cable standards. CAT6 cables, like Cat5e network cables, support segments of Gigabit Ethernet up to 100 meters, but they also permit restricted use in 10-Gigabit networks. CAT5e was commonly used to connect workstations at the beginning of the era, whereas CAT6 was implemented as the backbone support connecting routers and switches. Through the characterization of component balance, the Cat 6 cabling specification development procedure revealed the requirement to restrict the conversion of differential mode signals to usual mode signals and vice versa, leading to cabling systems with enhanced EMC (electromagnetic compatibility) performance.

Cost of CAT5e vs. CAT6 cables

Ethernet cable prices are influenced and determined by several factors, the most important of which are length, quality, copper content, and manufacturer. In general, it is seen that CAT6 cables are often 10-20% more expensive than Cat5e network cables.

Where and Which One to Use?

As both of them are utilized in several applications, It’s quite critical to answer the above question. We offer the following broad points to assist you to come to a conclusion.

The Ideal One For Your Requirement

When picking the most suitable cable for you, there are various factors to consider. What network speed is preferable for you? How many users are there? With an increasing amount of usage, the cable’s frequency (MHz) becomes quite crucial to consider. Will, the cable be intended to be used indoors or outdoors? Is it necessary for the cable to be hard or flexible? Is there any possibility of obstruction? After every consideration, the decision is completely based on your application.

It is often claimed that investing in higher-performance cables (CAT 6 Ethernet cables), is unnecessary because existing network infrastructure hardware does not necessitate 10 Gbps speeds. However, hardware is upgraded by the passing time; upgrading hardware is considerably easier than installing some new cables. The cost difference between Cat 5e network cables and Cat 6 Ethernet cables isn’t significant, so it’s usually a smart deal to choose the higher-quality cable to ensure that the network support and performance are ready for the upcoming days.

The ultimate crucial consideration, regardless of whether you use Cat 5e network cables or CAT 6 Ethernet cables, is that you always choose a cable that is 100 percent copper. Facts demonstrate that a poor cabling infrastructure can cause up to 70% of network downtime, despite accounting for only 5% of the primary network investment. So don’t take chances of failure by sticking to a cabling system that doesn’t provide assured performance. Always go for a supplier, like Cables.com that offers a lifetime warranty on quality CAT5e and CAT6 cables. Visit today.