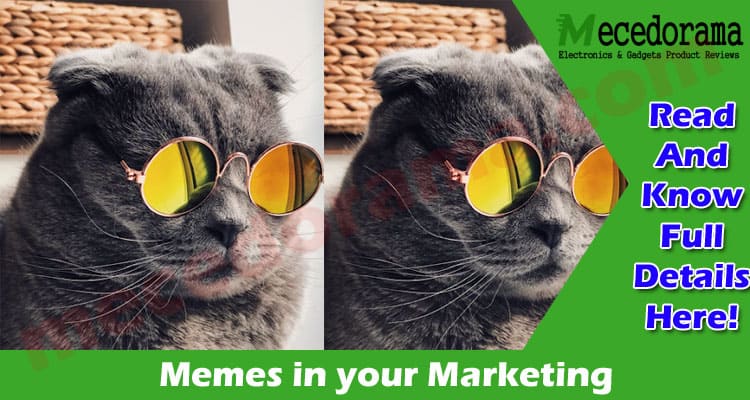 Memes in your Marketing: We tend to think that memes are jocular, sometimes absurd visuals that aim nothing but to make recipients laugh. And while that’s partially true, memes go way beyond amusement. In fact, they have recently started playing a crucial role in various fields, and marketing is no exception.

Memes have been with us for quite some time, evolving and adjusting to specific environments. Having been defined by Richard Dawkins in the late 70s as memes, they have influenced numerous aspects of our lives, including social and cultural.

Year by year, more businesses adopt memes into their marketing campaigns. Some do that to jump at the opportunity to bond with Gen Z and Millenials (these generations are most familiar with the concept of memes) and thus increase revenues. Others, in turn, have started using memes to endow their brand with style and deliver a critical message to the public. No matter the category you think you fall in, memes will be an excellent supplement for your marketing plan.

Say you lead an e-commerce business and work with people from various countries. Their worldviews are often different, so you always need to pay close attention to what you say and how you say that. What one culture may tolerate may be unacceptable for people from different countries.

That being said, business is often a slippery slope, and besides profits, you must find common ground with all people. While that indeed may seem like a challenge, it’s not a daunting task.

Memes carry textual and visual semantics, so you can talk less and deliver the necessary message. With the appropriately chosen list of colors, you can appeal to the public and make sure the message is successful.

Social, cultural, and environmental issues–to name a few–have been spinning around the globe lately. The United States has experienced several protests and movements that forced businesses to step in and support protesters.

Companies rolled out critical statements that motivated people to go outside and fight injustice. Moreover, brands aimed to alleviate tension and asked people to refrain from direct clashes with law-enforcing branches.

In such instances, memes are a robust tool to look at the peak of such protests in retrospection. Not only do their forms help reminisce about the movements, but memes also allow us to find positive, even funny moments in every demonstration.

As said in the beginning, some brands use memes to be distinguished from other companies. And believe it or not, memes are nothing but an exact way to achieve that. If you have a good sense of humor, your memes can improve your brand picture and showcase the company’s philosophy.

What’s more, if your memes become viral, you can anticipate a considerable increase in followers. This will allow you to create a platform for various discussions. As a result, you will boost your reputation, influencing users and the market in general.

Memes are a cost-effective way of appealing to the public

Brands often try to stay away from marketing campaigns, rolling them once in a while. Despite the number of reasons, most companies avoid marketing campaigns alleging they’re costly and ineffective. If for some reason, you think you don’t have enough resources to launch a campaign, there is no need to put marketing in a drawer and wait for the better times, financially speaking.

With memes, you don’t have to bother with resources you can allocate to the marketing plan. If you can make others laugh, coming up with memes won’t cost you a dime. Hundreds of templates are available on the web, and the one thing you need to invest is your time. And perhaps patience. Nonetheless, you can reach people and call them to act for free.

Memes are diverse and can be used in any context

Whether you want people to smile, giggle, or burst with laughter, memes are the utility to empower you to do that. With the right approach, they can be used in practically any context.

Moreover, they exist in diverse forms, such as GIFs, videos, and pictures. So you can use them interchangeably to get the best result.

What makes a good meme?

It is the receiver that decides whether or not a meme is good. That is, some people tolerate dark jokes, so clearly, they’d appreciate a more wry sense of humor from the author. Others may be less tolerant.

What we can say for sure is that a good meme is high-quality in terms of resolution and content, i.e., its text is highly readable and fits the frame.

Before producing memes and rolling them out

If the mentioned reasons look compelling, and you’re now gravitating toward using memes in marketing, hold on a bit. Before dropping your first meme, ensure to research the audience and learn their interests, viewpoints, and preferences.

Also, get familiar with widely used templates and learn which memes become more prevalent and which start fading away. It will help you meet people’s requests and design semantic-laden, chucklesome, and attention-getting memes in the long run.